The Waste King brand has long been synonymous with quality and longevity, which is proven by their commitment to the products they produce. They offer extended warranties on each of their products, and their warranties cover corrosion, rust, and any material or workmanship defects that might arise. If any issue does occur, Waste King will send a trained technician to your home to repair it for free.

The Waste King 9950 Legend Series ¾ HP Continuous Feed Operation Garbage Disposer (see today's price) is an excellent addition to their product lineup. This garbage disposal unit features a ¾ HP motor, and it can reach a dizzying 2,700 rotations per minute. A bolt mount offers simple installation, and each of the unit’s components are crafted from stainless steel to prevent corrosion or rust from occurring.

For those who cannot stand the grinding noise that a garbage disposer usually makes, the Waste King 9950 provides a quiet solution to your waste disposal needs. All of its moving parts are expertly insulated to reduce its overall noise output. There won’t be any rattling of plates in the sink or rocking of the refrigerator with this model.

I recently bought the Waste King 9950 Legend Series ¾ HP Continuous Feed Operation Garbage Disposer as a replacement for my old disposer that was leaking like a sieve. It was purchased from Amazon based upon the positive reviews. Out of nearly 100 reviews, 85% of buyers rated it four stars or higher.

My wife and I were able to install the 9950 with the three-bolt mounting system together. All told, it took about an hour and a half to do. She stood and held the sink flange in place, handed me the tools I needed, and so forth. We both agreed that it was actually quite enjoyable. (Are we weird for saying that?) The instruction manual was exceptionally well-written, and the well-laid out illustrations were very helpful. Another thing that made the installation process even simpler was that all of the sink mount components were pre-assembled in the correct order that they were needed. It made it much simpler to understand what the instructions were referring to.

The components that were not provided were a rubber dishwasher connector sleeve and plumber’s putty. While we were able to reuse the connector sleeve from our old model, it may be something that another homeowner needs to purchase. If you have a sink that is made out of marble or another kind of “thick” material, you’ll probably need to have an optional deep sink flange.

Now that we’ve had it installed for a few weeks, it is working like a champ. We have a family of five, so it certainly gets put through its paces. It is powerful enough to handle the toughest food scraps, and it works relatively quietly – unless you try to grind up a metal spoon. My four year old tried his best, but it just couldn’t do it; although, it did manage to bend one of them in half. The 9950 came through without a scratch. It is worth noting that this model can handle grinding chicken bones without so much as a hiccup.

It spins faster than most other brands, and I think that is what makes the biggest difference in its digestive capabilities. I appreciated the fact that this came with an included power cord, and because it measures 36 inches, it was more than capable of reaching either one of my under sink power outlets. I also like that this model was made in the United States. Waste King says that they keep production in the U.S. because it allows them to exercise the utmost in quality control.

The warranty is absolutely outstanding. Waste King has long been known for offering some of the best warranties in the industry, and this ten year warranty ensures that I will get many years of use out of my investment.

There are a lot of things I could praise about the Waste King 9950 Legend Series ¾ HP Continuous Feed Operation Garbage Disposer. It does its job more than adequately, works seamlessly, has a superior warranty, etc., but it was the ease of installation that sold me on this brand for life. It’s rare to find a brand that offers 100% of what it advertises, but Waste King does. For me, trust is something that must be earned, and they’ve earned my loyalty. 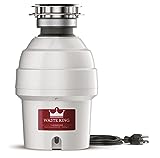 The Waste King 9950 Legend Series ¾ HP Continuous Feed Operation Garbage Disposer certainly is not the cheapest garbage disposal on the market today, but most reviewers (including me) believe that it is worth spending the few extra dollars for the power and durability that it provides. It is one appliance that we use multiple times a day in our household, and it has held up well. On the small chance that something should occur, I know I have Waste King’s extended warranty to back me up.

Previous Post: « Kitchen Organization and Storage Hacks
Next Post: Garbage Disposal Stoppers: How To Pick the Best One »