A garbage disposal is one of the most underrated appliances in the entire kitchen. It is there, when you need it, ready to chop up food waste. It helps keep your garbage clear of biodegradable material that will only make your kitchen smell as it sits out. However, as is the case with any appliance, there may be a time when it will wear down and you'll need to remove it to replace with another disposal. Should that happen, you will need to know how to remove a garbage disposal.

What Is a Garbage Disposal?

The garbage disposal is a circular appliance a little smaller than a square foot (although there are different models, so some garbage disposals will be bigger and others will be smaller). The disposal has a series of spinning blades on the bottom of the device. These blades are similar to those of a coffee grinder. When you run the disposal, the blades will spin and chop up whatever is put down the disposal. This is used to help chop up food waste you will not be using.

By chopping up the food waste, the garbage disposal helps keep material out of the trash. This not only reduces the debris that ends up in a landfill but it also helps prevent your kitchen from smelling. If you didn't have a garbage disposal, the food particles would end up sitting in the trash for days, causing the degrading food's odor to linger throughout the

Extend the Life of Your Garbage Disposal

While you're looking at how to remove a garbage disposal, you may be doing so because the current disposal has failed you. While all appliances have a life expectancy, it is possible to extend the life of your new garbage disposal by taking care of it properly.

First, there are a number of objects you need to avoid putting down the drain. Coffee grinds are one of the most common. While these small particles may not seem like much, the grinds stick under the blades, preventing them from running. Avoid putting coffee grinds down the garbage disposal whenever possible.

You will also want to avoid putting egg shells down the disposal. Similar to the coffee grinds, the egg shells will stick under the blades and corrode.

Beyond the smaller items, you shouldn't put anything down that is difficult to cut, such as chicken bones. You should also avoid putting down any kind of carb-heavy objects, such as rice or pasta. These objects will sit in the disposal and in your drain, absorbing water. This will force the grain to expand, which increases the chance of causing a blockage in the drain.

Lastly, you should never put any kind of flour down the drain. Flour mixed with water basically becomes a glue, which is terrible for the garbage disposal. By not putting these food items down the drain and always running the disposal with the water running, you will extend the life of the disposal.

Beyond the pan you only really need a flat head screwdriver and a Phillips screwdriver. You can wear safety glasses and gloves if you'd like, but you're not working with electricity or anything sharp, so those items are not necessary. You should have some towels on hand, just in case. If you've recently poured drain cleaner down the garbage disposal (because of a clog) you'll want to open nearby windows so fumes from the cleaner's chemicals do not linger (often these chemicals have a heavy dose of bleach).

Now you have everything on hand you need you are ready to begin the steps for how to remove a garbage disposal.

How to Remove a Garbage Disposal Properly

The first step in how to remove a garbage disposal is to turn off the water running into the sink. The water control valve for the kitchen will be located under the sink. Just turn this off and you're ready to continue.

With the water shut down, the next step for how to remove a garbage disposal is to position the water collecting pan under the disposal. You'll probably need to clear out any other material from under the sink to give you some space to work. The biggest issue here is space (especially if you have a small kitchen). You might want to have a flashlight on hand too, as some disposals may have screws on the rear side of the appliance (although if you don't have a flashlight you can either use the flash on your cell phone or just go by touch).

Disconnect from the Dish Washer

Disconnect the tube running from the dish washer to its side. There will be a clamp here that is tightened with a screw. Loosen the screw so the clamp will freely move up and down the tube. Now remove the tube connecting to the garbage disposal. Water will probably pour out a bit, so have the collection pan ready. Tilt the tube downward toward the pan to collect any water that might spill out.

You can now remove the next tube, which connects from the garbage disposal to the plumbing line. There are a few ways to do this, depending on the connection you have. If you have a tube, the disconnect process will be the same. Loosen the screw around the clamp, then pull out the tube (and drain it into the collection pan). However, you may have actual plumbing connecting the appliance. Usually when working with a garbage disposal, you will have a PVC connection and a screw cap that secures the plumbing to the garbage disposal. Loosen the screw cap and slide it back on the pipe. This will disconnect the plumbing from the disposal.

Disconnecting the Garbage Disposal from the Sink

If the disposal doesn't twist, there might be plumber's putty or a glue that has secured the disposal to the sink and provided a watertight seal. You don't want to just pull down as it may cause damage. Instead, use the flathead screwdriver and slide it in between the sink and the disposal. Pry the disposal loose here, then repeat the process around the entire disposal. Once you have loosened the disposal away from the sink, you will be free to disconnect it.

If there is any residue remaining from the putty or glue, you'll want to wash this off when it comes time to install a replacement garbage disposal. You can use a sanding paper for this and there are special cleaning solutions designed for this, which you can pick up at your local hardware store.

With everything disconnected, go about installing the new garbage disposal (if you're planning on doing this), or install the traditional plumbing line to the bottom of the sink. Just make sure to turn the water line back on when you are done with the removal and installation. 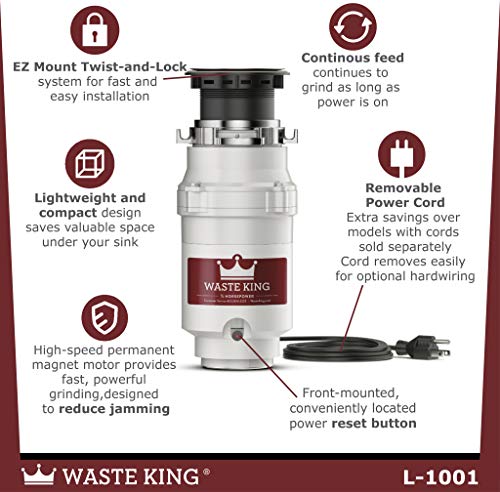 The garbage disposal requires some additional steps to remove when compared to other appliances in the kitchen. However, it is lightweight and easy to do as long as you follow these steps. Once you have gone through these pointers on how to remove a garbage disposal, you will remove the device, no matter the make or age of the appliance. 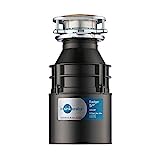